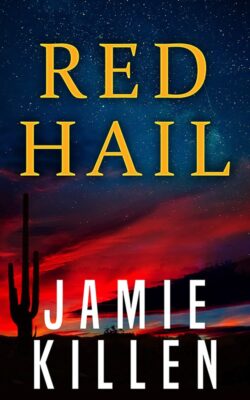 From the opening line of Red Hail, you are immersed in a gripping story that sweeps you into the world of Anza as she witnesses a series of seemingly biblical disasters hit the town where she lives. In the aftermath, she forges a friendship with the enigmatic Dove who maybe knows more about her than she knows about herself.  The two women strive to find out what has happened in the town, and how to stop it, while 1960’s Texas makes a perfect backdrop. Balancing pathos and humour, Anza deals with her own problems as well as those resulting from the curse of the red hail.

The story more than entertains, throughout it addresses the issues of tolerance and racism, as the town fractures under the impact of the disasters and looks for somewhere or someone to blame. The links between uneducated fear and the impact of racism on Anca and her friends and family, and the resulting consequences are deftly handled.

If Killen had stopped here, this would be a book worthy of sitting down and reading. Yet the author tells us the story not only from Anzas perspective, but from the perspective of history as the parallel tale of Alonzo and Colin 60 years later seemingly has ties to the past.

Can exploring the past help Colin to help his partner to come back to him, and will he be the same if he does. Killen skillfully weaves in and out of history, adding a sense of urgency to the tale of the past that will impact the future if the mystery remains. As she adds to the cast who are experiencing the curse in the modern day tale we are given to feel that there is more to Anza’s history, and we are not disappointed.

The story carries along at a fantastic pace… I read this book in one sitting. It hints of the storytelling skills of Stephen King, in both setting and feeling, but with more humour. A dark speculative fiction novel that wonderfully leaves you guessing its exact niche, and a feeling at the end that it doesn’t matter where it sits, just that it exists and is told.

Favorite Quote: “Most mass hysteria cases are like that. People lash out, blame someone, turn against each other. THey tend to have a lot of shame afterward.”